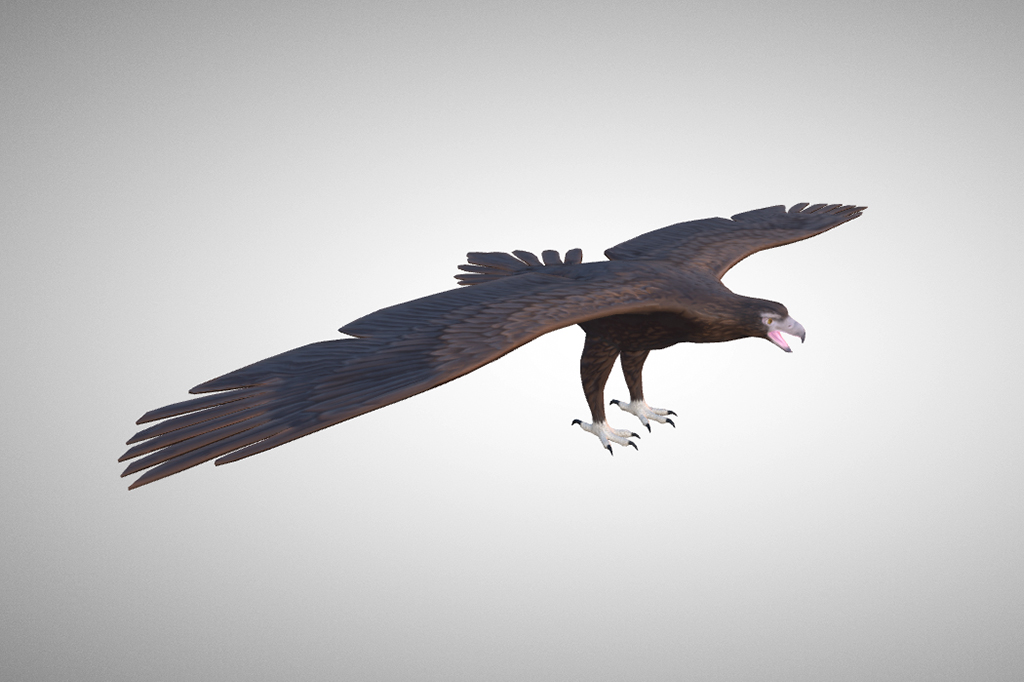 you can never touch your shadow by paratactical artist Dean Cross brings together three mediums; one still image, one moving image and an Augmented Reality (AR) sculpture. The work calls on Australia’s largest bird of prey, the Wedge-tailed Eagle, as a vehicle for thoughts on transcendence, mobility and time.

This tangible but elusive creature occupies physical space yet evades the grasp of humankind. This confluence between materiality and immateriality is what prompted Dean to replicate this physical being digitally, in the untouchable and disembodied realm of Augmented Reality (AR).

The distinction between physical and digital objects and places are blurred in the onsite component of you can never touch your shadow at Campbelltown Arts Centre. The artist Dean Cross brings together three mediums; one still image, one moving image and an Augmented Reality (AR) sculpture.

The Augmented Reality (AR) sculpture of the Wedge-tailed Eagle is the keystone to the experience of the work. This AR world is accessed through an image of a QR code temporary tattoo on the artist’s body, linking the digital world to the physical, and the eagle to the artist. The eagle is animated to evade the viewer as it moves throughout Campbelltown Arts Centre. The eagle is only visible through the digital lens of a camera on a personal device, yet when it exists within and interacts with the IRL world, the intangible nature of this digitally-rendered object is almost forgotten.

The still image and AR sculpture are accompanied by a video work that considers edges, boundaries, borders and displacement. This new video work commissioned for BLEED is an evolution of the work Right Lands, which was initially conceived and presented in 2015. Seven years later, Dean Cross will retrace the steps he walked in the original video, traversing the Northern, Southern, Eastern and Western boundaries of the artist’s family farm on Ngunnawal/Ngambri Country, the place where over years he has connected with the family of Wedge-tailed Eagles which have inspired this work.

you can never touch your shadow is commissioned and produced by Campbelltown Arts Centre as part of BLEED 2022.