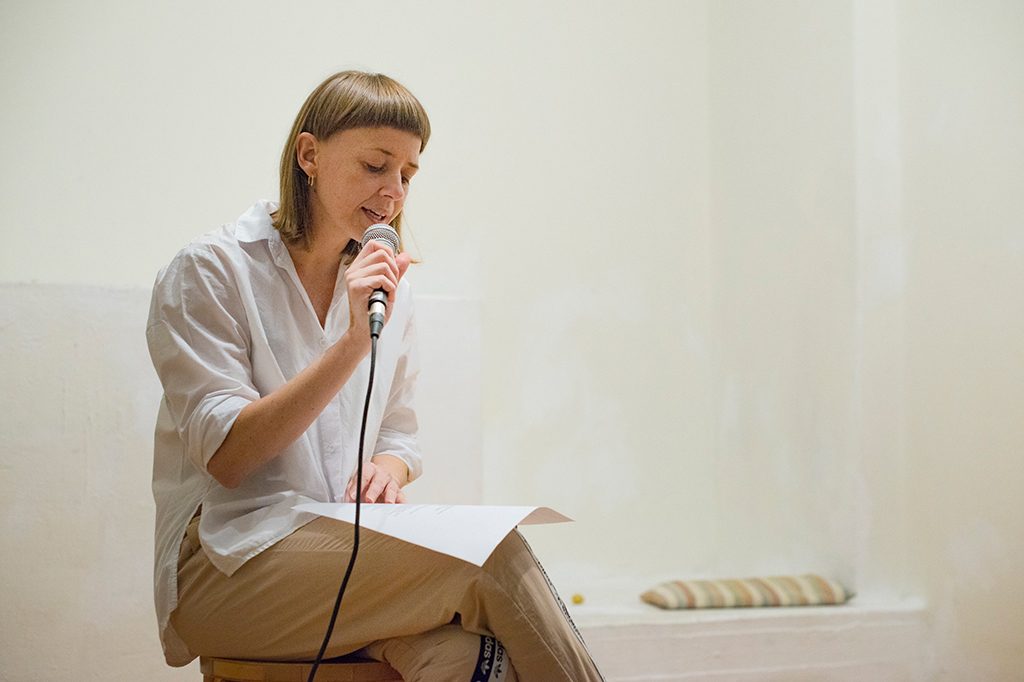 C-A-C welcomes Australian dancer and choreographer, Rhiannon Newton who will be in residency developing a new work titled, Explicit Content.

Explicit Content embodies poetics that describe movements traversing the fleshy boundaries of bodies. It reveals that bodies are perpetually – materially, chemically, socially and fictively made and remade by the world around them. The work aims to tell explicit, sensory and illustrative stories about these traversals as they occur, exposing the world and our actions as dangerously and delightfully complicit.

The project will see Rhiannon performing and collaborating with dancers Ivey Wawn and David Huggins. In this initial development stage of the work, Rhiannon will collaborate with the dancers to develop the embodied practice underlying, Explicit Content. Rhiannon will also be supported by Lizzie Thomson for ongoing dramaturgy.

Rhiannon is an Australian dancer and choreographer who grew up on Dunghutti land (Kempsey) in regional NSW. Her artistic work draws attention to ecofeminist ways of understanding bodies as inextricably entangled with the world. From Gadigal land (Sydney) Rhiannon makes contributions to community and culture through creation, performance, collaboration, teaching and curation. She leads the artist-run venue, ReadyMade Works and the lecture-performance series, Talking Bodies.

David Huggins began dancing while completing his psychology degree in Aotearoa New  Zealand. After graduating with a Bachelor of Dance from the VCA, University of Melbourne, he worked with Russell Dumas’ Dance Exchange in Melbourne, performing nationally and internationally with the company for nine years.

David  has also worked for other artists including Douglas Wright, Xavie r Le Roy, Rhiannon Newton and Martin Del Amo. Asid e from his work as a dancer, he has begun to explore his own choreographic  interests through various residencies, and recently presented his first full-length work, Once More, with Feeling in New Zealand.

Ivey Wawn (1990) is a dancer working and living primarily on Gadigal Land (Sydney). She makes performances mainly for live audiences and performs regularly in the work of other artists from a range of disciplines.  She is committed to dance as a potential form of resistance; to social abstraction and commodification, making work about labour, being together, sensation, magic, and about the commodity form among other things.  She is supported to continue working as an artist by a secondary income in hospitality and continues to study a Bachelor of Political Economic and Social Sciences at the University of Sydney since 2016. Ivey’s work has been supported by Arts House, the Australia Council for the Arts, Critical Path, DirtyFeet, First Draft Gallery, Kaldor Public Art Projects, Liquid Architecture, Next Wave Festival, Performance Space, ReadyMade Works, Underbelly Arts Festival among other institutions. More importantly though, her practice is supported by the comradery, work and intentions of her friends and colleagues both inside and outside of artistic practice.